I called Home Depot on Tuesday to check the status of our floor order and was told that it wouldn't be available for pick up until December 19th. Again. Even after we changed our original order so that it would be in sooner. Payton and I went in the next morning to pick out the prettiest of the in store laminate options. After going through the process of trying to cancel or existing order turns out our cork had come in that morning and it was all a big misunderstanding. Immense relief. Maria and I spent Wednesday and Thursday working on the pillows, making the pattern for the lighting, and testing ways to route out spaces for the acrylic while Payton worked out the code and tested the sensors.

Saturday found us finishing our edging and doing lots and lots of sanding. Unfortunately, the only hours the woodshop is open on the weekends is 9 to 1230 on Saturday morning and it closed before we had a chance to route out our holes with the laminate trimmer (which by the way is not allowed to be checked out. We couldnt wait until monday to get the holes cut, so I think Maria ended up buying or renting a laminate trimmer from somewhere (!!!). Tonight we will be burning the midnight oil wiring and soldering and preparing for the epoxy pour tomorrow afternooooooon. A little bit of gluing, screwing, sewing, stapling and staining and we should be finished. Lots of work yet to go, but we are almost there!
Posted by Micaela at 7:49 PM No comments:

Micaela and Maria's trip to the Foamforyou Foam Emporium

Maria and I took a drive out to Troy this past Saturday to peruse the aisles of the foam emporium and test out the 'medical grade foam' for ourselves. Turns out is was a good thing we went ourselves rather than just ordering online. It took much deliberation and much flopping down on different shaped foam to decide on what we wanted, which turned out to be very different than what we originally had in mind.

Maria picked up the fabric today and the Magnets are in the mail, so god willing, we should have everything assembled and functional by next Tuesday.

Still haven't heard back about the cork flooring... getting nervous... 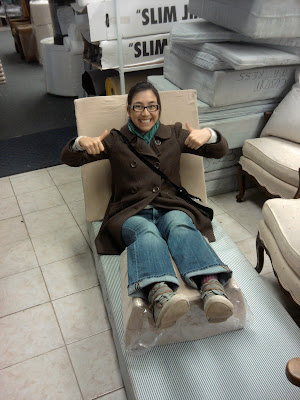 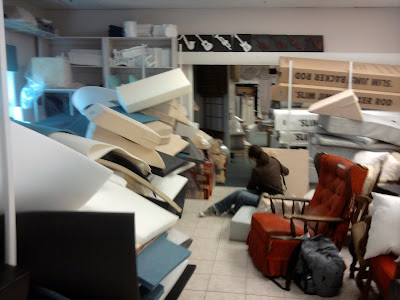 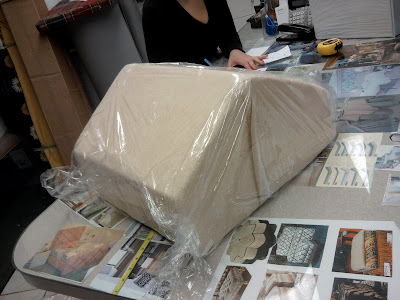 Posted by Micaela at 9:46 PM No comments:

Pics or it didn't happen.

For a more comprehensive photographic journey through the mathatter's process see:

The site visits are always exciting and enlightening. They help remind me why we are doing this project and what we need to keep in mind. They also keep us thinking more realistically about where and how our project will fit into John, Sarah, and Otto's lives. The pictures on Payton's blog do a better job of sharing these visits than my words do.
Posted by Micaela at 5:56 PM No comments:

The countdown on the website says eight days left. Scary.

It's a bit more than that due to some recent schedule changes, but nevertheless, time is running out.

Seeing as there is no evidence of the recent drama on my blog, I shall offer a short recap. The past few weeks have seen the destruction of team otto, the subsequent creation of two new teams (team fucknut and the mathatters), and the evolution of a reactive and movable radiant heating system. I can't say that I am thrilled with the turn of events. As I have previously expressed, I see the split as unprofessional, immature, and illogical. Part of the reson I joined this class was to work in a large interdisciplinary team and see that team through obstacles and disagreements, though one can only imagine the drama that would have arisen had team otto remained united.

Enough about the split though. The radiant heating mat that Maria, Payton and I have been working on is finally coming together. More of the parts are arriving every day and we are all crossing our fingers that they will work the way we want them to. I spent several hour in the woodshop this morning getting the joining pieces cut to shape and fitting them to the based OSB. The shape of those connecting pieces has gone through a lot of iterations as our design has evolved, a few of them are pictures below along with an image of the finished connectors. Tomorrow we should be gluing and screwing the wood pieces together and stapling on the mats. 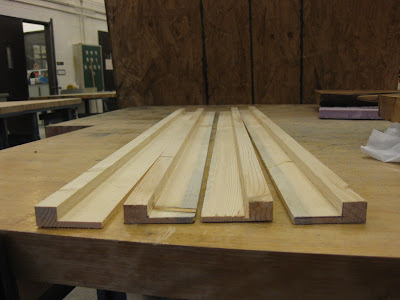 I think our biggest issues going forward will be getting the right finish with the acrylic inlays and integrating the cushions that we decided to add last week after our discussion with Max. We spent about an our sitting on our heater arguing about the cushion: whether or not and how. Some pictures are attached of a cushion in progress. 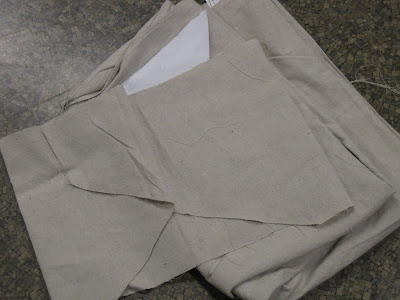 Payton and I went to Home Depot last Wednesday morning to order our top surface and after much debate decided on a 'burnished straw cork,' which was meant to arrive on or before November 30th. I recieved a call late the night saying that the arrival date had been pushed back to DECEMBER 17TH. NOT OKAY. I went in as soon as possible (meaning black friday, talk about bad timing) to sort it out, and after a great many phone calls, cancellations and reorders we ended up changing to a 'cork mocha' which will still not be arriving until early next week (at the latest) this does not give us much time to finish the surface and install the hardware necessary for the reactive lighting. All very worrying.

We will get there though. I am happy with the mission of our project and the fact that we were still able to make a (hopefully) suitable product despite having our budget and manpower halved. Though we are more efficient as three, I believe we would have had more opportunity of creative exploration as six. As is stands, we just don't have the time to explore as many options as I would have liked.
Posted by Micaela at 5:28 PM No comments:

Since the last time I posted we have formed our final groups and had two reviews. The first one was about our group dynamic/ structure and plan for the semester. Our idea after the first meeting was to make a google doc on which we could all contribute ideas about our goals and values. As soon became quite evident, this was ineffective, as four members of our six member group neglected to fill it out.

After our initial coordination failure, we managed to contact John and Sarah and arrange a visit, so we could get a better idea of their plans for the house and what they felt comfortable with as far as our role and what we plan to install in their house. They were very welcoming and open and answered all of our numerous questions. After the visit, we had a much better idea of what would be feasible and they might be interested in. It is interesting to have artists as clients for an art/arch/engr project when they strong and relevant ideas and opinions of their own for the house.

The group has had a lot of time getting together and thus have relied a lot on independent work (as seen in our most recent presentation :( ). I don't think this is a great method, but considering our difficult schedules, it might be the only doable method. WE are going to have to work out a better routine as the semester progresses, I already see a lot of frustration and stress from my teammates.

We each had individual proposals this week, I spent my tiem researching radiant heating systems and figuring out how to make a visual display of heat use. I settled on translucent wood that would glow (via LED) where the most heat is being applied to the floor. My plan was remarkable similar to Maria's and we have decided to more forward with this idea, incorporating in elements from the other's proposals. 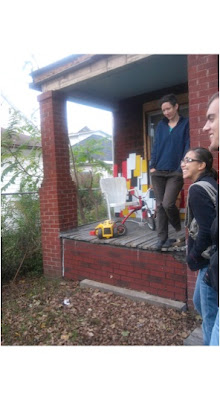 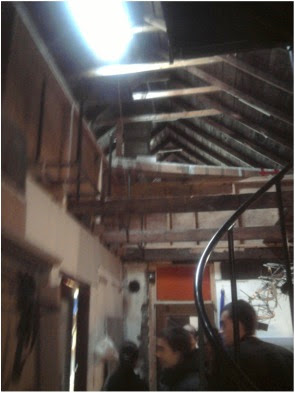 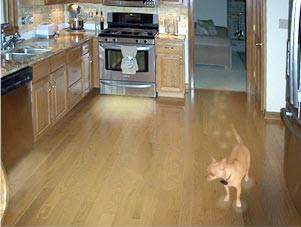 Posted by Micaela at 1:43 PM No comments:

I hold a firm belief that you can't design for a specific person or place unless you know that person or place. Without having seen the house and talked to the the owners, I think a lot of our designs were just shots in the dark. The feedback we received from this presentation was immensely valuable and I feel like we all have an actual idea of the possibilities that exist within the project now. The powerhouse was not at all what I was expecting. I was expecting, i guess, a more livable space, something a little more homey. One of the most exciting things about the site though was the community element, I love that the neighbors are interested in using the space and integrating it further in the community, I love that one of the neighbors even stopped to introduce himself and offer some of his opinions on the project. I love the mix of foreign cultures in this midewestern-US setting and I was shocked that for one months rent at my house here in Ann Arbor, I could OWN a house and yard in Detroit. 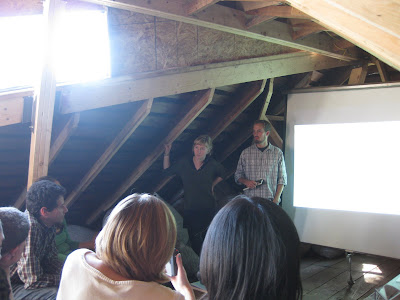 My week four team has had the best group dynamic of the four. We were assigned to the 'hourly folding water' project which has evolved into a sort of indoor gardening scheme, it was fitting that we first met right after the botanical gardens tour, we were all still fired about about the awesome plant power systems and we were excited to get going. We sat down the following evening to figure out what needed to be decided upon and researched an then split into smaller groups to work on those specific items. We ended up with a hydroponic system that captured light through a sun tunnel, allowing plants to grow throughout the entire year without the owner having to water or monitor sunlight or really do much work at all. The work load was split pretty evenly and pretty easily according to our respective skills the architects worked on the structure, and did laser cutting, digital renderings and digital models. Peyton worked on logistics for the sun tunnel and the water pump. Rachel, natalie and I figured out the planting scheme and materiality, cast a model of the hydroponic pots and built the model of the space, made the expanded clay beads and made the presentation. Im not sure if it was our personalities that fit together well, or we were all happy with the project and what parts of it we were each able to do, but from my point of view, this week went really smoothly. 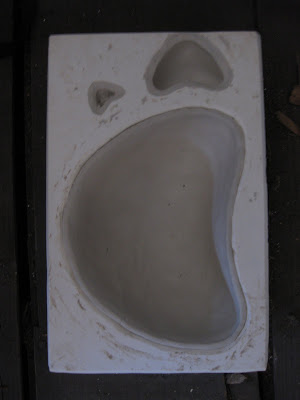 Posted by Micaela at 8:03 AM No comments:

Micaela
If I had asked my customers what they wanted, they would have said 'a faster horse' -Henry Ford